Since starting this little venture called "Bexx Secret Garden Supper Club" a year ago, I have leaned so much. Thanks to the many suggestions of our guests, we hope we've addressed all the issues you brought to our attention. The first being,  I HAVE A CHEF, yeah!! She will be assisting me in the creation of recipe's, my menu's & most important, helping me to execute at my events! Now, as many of you have requested, I'll have time to spend with all of you. No more running around like a mad woman, then getting up to sing.

We've also made some big changes to the Secret Garden, in order to be more accommodating to our quests & hopefully make you all more comfortable. We've raised the patio covering, so we can get more heat when needed & to protect more from the elements. We also designed the new patio cover so it is clear. Now you can gaze up at the stars during your evenings in the Secret Garden. We've also put in a new bathroom. We have also worked out our staging, sound & lighting issues for my performances.

I'm very excited, to let you all know, "we" are preparing for our first Secret Garden Event of 2012!!!
We will be celebrating the birth, life & music of Cole Porter. 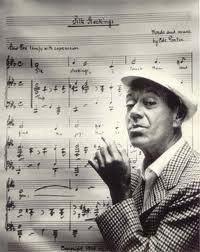 We've created an amazing menu, that we hope reflects the life and time's of Cole Porter.
I am working on some of Cole's most iconic songs to perform throughout the evening.
I think we've come up and are creating a truly magical and wonderful evening for those of you who can attend.

I hope all my previous guests and fans can make it along with some new faces! Terry & I &  our team look forward to seeing you all and sharing the "new" space we created. 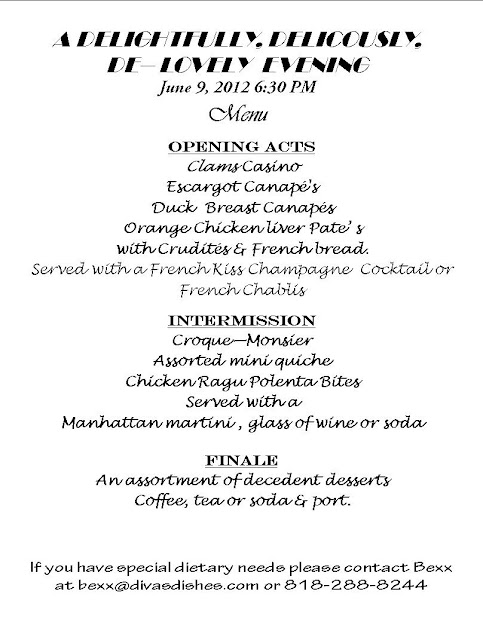 For more information or to book a reservation click the buttons on the left hand side
of my blog page. Also note: there's a discount for those of you that reserve early!
Posted by The Diva's Dishes at 10:23 AM No comments: Links to this post

It's been some time since I blogged.

Happy May Day everyone!

When I have some time I'll explain my absence.

I'm blogging today to give everyone a heads up on my next event! Mark your calendars for June 9th!! We'll be celebrating the birth of Cole Porter and his life of song with a:
Deliciously Delightful De-Lovely evening!!

I'll be performing Cole Porter classic through out the evening  with the accompaniment of Wayne Behlendorf & back up tracks. My new chef (more to come on her later) and I will be creating a menu around Cole Porters life and all the wonderful places he lived.

I will be sending out my news letter in the next week with all the details! In the meantime make a note to save the date June 9, 2012 at Bexx Secret Garden! If you aren't on my mailing list watch my blog and  Bexx Secret Garden Facebook page for further details.

Posted by The Diva's Dishes at 1:20 PM No comments: Links to this post

What a week it was. I have so much to share! We got back last night and I had my first full nights rest in several weeks. I almost feel human this morning, almost. I'm now sitting on my couch drinking a decent cup of coffee with my two puddie cats on my lap, purring away. They are so happy we're back home. Uncle Curtis stayed with them & took good care of them, but they love having mommy home.

First, let me say.......... I will NEVER, yes for those of you that know me so well, do remind me of these words later, do something like that by myself again!!! We all know I'm pretty insane with the things I do. Being dubbed as "Martha Stewart on Crack", the "Tasmanian Devil" etc. etc.  My body aches from head to toe, my brains is pretty much mush. I'm just exhausted all the way around.

For those of you that don't know the contest results. I didn't win. I thought for sure, I could be a shoe in after seeing the tables last year. Not so much, the BIG GUNS came out this year and were locked and loaded, ready for battle! Wow, it was amazing, all the creativity & talent there! (I'll be posting pictures and video later, Terry has most of the pictures). The Company that pretty much swept the whole competition had a "crew" of about six, two being guys it looks like they hired to build and tear down their structure, yes I said structure, steel at that. There was only myself and my new friend Cheryl, who has been doing the contest for 5 years, that did our tables by ourselves. Again, never again...

The one to left of  me was beautiful. They had like 5 ladies working on their display. The one on the other side of me you can't really see, was amazing. It has little mice with sewing thread that spun around. It was beautiful and so creative and they didn't place.
I never did get a final count on how many tables there were. There were originally 36 or close to that, but some did not show up. I literally did not even see all the tables, since I set up to the bitter end at 9AM on Weds. before the judging. I then had to run back to my cousins to shower and change and get back for Tutera's judging at 11AM. We then went out on the floor of the convention to see what was there and to get some footage and some little interviews.
We then had to be back at our tables at 2PM to tear down everything we'd just created, load it out and then get back to Caesar's Palace for the closing session and announcement of winners by 5:15! It was insane, because we had to return the chairs I'd bought for my display, then come back and get the rest of the stuff! (We didn't eat all day, until 9:30PM)

During breakdown is when things got a bit interesting. When we got back to the table to tear down, this woman came up to me with Erica the gal from Catersource that was handling to competition and said "I've been looking for you". "I want to buy your center piece", huh? I was totally shocked! I looked at Terry and said "what do you think"? He had talked about how we should keep the display for Bexx Secret Garden. Who was I kidding? After all, he is still the husband I know so well. Of course, he said sell it, especially after all the money I spent on the thing! The short of it is. She is now commissioning me to make her custom design for her entry and I'll be doing some other greenery designs  in her home. I didn't win the competition but I got something even better in some ways. A new client!!! We have some other exciting things that came out of our walk on the convention floor that I'll be sharing later.

All in all, I learned a lot, not just about the competition but I learned quite a bit in the sessions I was able to get to on Monday. Preston Bailey was amazing and so was Tutera's closing session. This whole experience has helped Terry and I to look at all the things I do and where we want to go with my talents and the branding of The "Diva". So watch for some changes in my blog and my site (that is truly, just about finished)!

Everyone, have a wonderful and creative weekend!
Posted by The Diva's Dishes at 9:42 AM 4 comments: Links to this post

An Evening With Bexx Sept. 22nd

Promote Your Page Too

Promote Your Page Too

Welcome to Diva's Dishes: where you'll find stories about the life and struggles of trying to survive as a creative being in such a competitive world and hear stories of the struggles of the entertainment industry. Have a glimpse into our little piece of the wacky world of Hollywood . Share in our travels, our music & our business adventures. Watch my urban garden grow and share & try some of my recipes. Follow my accounts of starting BEXX SECRET GARDEN SUPPER CLUB.
You'll also meet a cast of characters from NOHO!
Follow the wacky life of The Diva and her dishes.